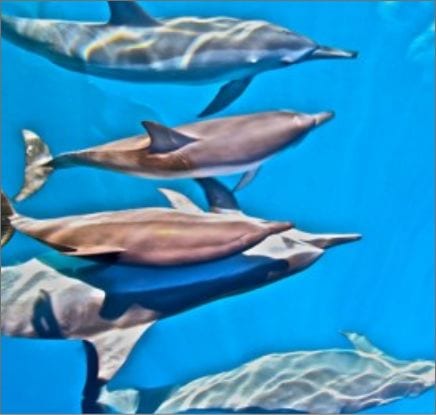 Every morning on our na pali couast boat tour, we start with an ocean life and safety briefing before we head out to the incredible Na Pali Coast. I find passengers are shocked again and again by the dolphin portion of the briefing, where I describe what was revealed in the movie The Cove. The movie was a shocking documentary about the dolphin trade, where rich corporations are funding the exploitation of dolphins for big profit returns. These intelligent animals are inhumanely put into saltwater tanks to live, where as dolphins in the wild are pelagic creatures (e.g. they travel in family pods on migratory routes in the ocean’s deep scattering layer at night, and move back to shallow, coastal waters in the early mornings). Most would be appalled that the dolphin shows can fetch over $150,000.00 for a marine park show, and stunned to learn that the dolphins are often drugged in their tanks to keep them alive and able to cope with the stress of their artificial surroundings, which would otherwise drive them to suicide.

Why are dolphins so important to humans? What have they done for me lately? Am I down on Sea World? OK, Good questions, that I will answer from a captain of a vessel witnessing thousands of dolphin encounters over my years. The dolphins are so intelligent, they risk their lives to put humans into safety, and this is evidence of their connection to humans. There are endless accounts through history of people being saved from drowning by dolphins, and of dolphins protecting surfers and swimmers from sharks, by putting themselves between the human and the shark, and even bumping into the shark to fend them off.I grew up living close to Sea World, and what I believed was fine and normal dolphin behavior in tanks is such a sharp contrast to how to the perspective I have now as a captain seeing dolphins everyday in the wild. It is not normal for them to be in captivity. They are quick and agile, they move effortlessly in the wake of the boat, they give us pleasure in feeling their excitment as they spin and jump through the air. We are always touched by the new baby’s that spin in the air next to their mothers, like little footballs. And then there’s the “eye chat” where we catch them looking at us from below the water’s surface. Watching their acrobatics is just about the best stress release for any human to experience. We just need to set up future parks where we do not try to change them, or take them out of their natural roles, but let them change us. I see a future where park boats can take people to see and experience something real. Remember dolphins need to and deserve to be in the ocean.

I watch people’s face’s cringe when I tell people that in 2010, 23,000 dolphins in Japan were slaughtered and fed unknowingly to innocent children and adults. In some places of Japan, certain dolphins that once lived there are now extinct. Which makes everyone think, what would our planet be like without dolphins as part of the ecosystem? When people ask what the dolphin numbers are at, it is sad to say that they are down. Many of our clients are American baby boomers that grew up watching “Flipper” on television. And so we all thought that buy tuna labeled as “dolphin safe” was enough to preserve these intelligent creatures. The academy award winning dolphin movie, The Cove, documents the Ric O’Barry story, aka the pioneer trainer of Flipper the dolphin, a show that put Flipper into every household in America.

To me this was the best show ever made about dolphins because it created an awareness of what overfishing and marine pollution is doing to our oceans. It’s an updated track record on what we humans are all to be held accountable for, helping aid the well being of the ocean and what lives within it. The survival of one of the most intelligent species on the planet, the dolphin, is in our hands again. So what can we all do? Three simple things to change the world for the better:

1. Next time you see that plastic bottle on the ground, take responsibility for it being there and go recycle it so it doesn’t end up in the seas.
2. Try to use aluminum personal bottles instead of plastic ones.
3. Support products whose packaging shows a commitment to create less waste

“Remember that the average plastic bottle takes over a thousand years to decompose, and there are thousands of miles of floating plastic garbage in the ocean at present.