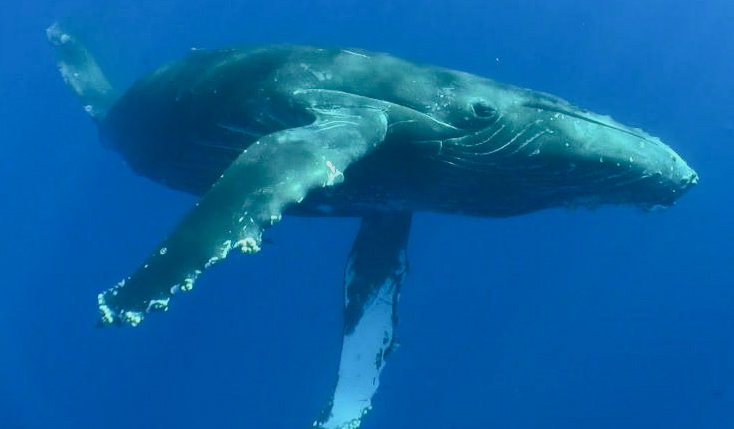 April 27 2012, around 11am – one mile northwest of the Forbidden Island (Ni’ihau). Today we would capture something truly spectacular – Humpback Whales Mating live on video! Probably for the first time on this planet! Probably witnessed before by no other earthlings! But I did not even know I had these photos until eight hours later, while going through the footage.

For the last thirty plus years, all my whale encounters were with hopes of happening upon that holy whale grail—actual mating. We whale enthusiasts thought it could never be photographed. Because after the males battle it out, the winner and his female vanish into the dark depths to consumate their love—or so we thought. Imagine my speechless shock when I replayed the video—three times to register it! My knees buckled, and buckled again before bed as I joyfully wept, thanking the Creator.

Not just a fluke of luck, this rare encounter that crewman Wayne Daniel and I alone witnessed. I had asked four others to accompany me to Ni’ihau. All had believable excuses—too busy, schedules too hectic. Wayne and I, the last men standing, were chosen this special day.

The seed or thirst for ocean adventure had been planted in me long ago, reading National Geographic, watching TV specials. My hero was Jacques Costeau—he who brought ocean secrets into America’s living rooms, planting seeds of adventure for the next generation.

Crossing the Kauai Channel to Ni’ihau is serious business—no cake walk. Ocean conditions can change quickly from best-day-of-your-life to worst nightmare. I recall that one February winter day 10 plus years ago, when the temptation to cross those short shimmering waters had been too great. And everything was great until the winds changed!

Cold winds rose suddenly from the north. White capped waves everywhere, cresting to 20 feet—walls of water that soaked us to the bone. Thankfully our bilge pump continued purring. We cut up black garbage bags for make- do rain jackets to fight our shivering and probably hypothermia. A lesson learned and never forgotten.

But this day the ocean conditions are perfect. I had been up since 3:00 am studying the NOAA weather and radar charts, double checking the checklists, re-thinking lessons of the past. Now at 5:40 am we’re headed to Ni’ihau with the first glow of the sun rising behind us. On to where modern life bypassed, and time had forgot!

Hawaiian variable winds blow rarely here, at best only 20% of the year. Days of no wind are even rarer. So we’re blessed this morning with pancake flat waters. I remarked to Wayne how incredibly flat it was, that our prayer this morning had been for safety, that God was revealing it. The channel door is wide open!

Our visibility is almost 15 miles, but hazy. We can’t yet see Ni’ihau. I would have to rely on my compass, steering 270 degrees, to cross just north of the island, lining up with nearby Lehua Rock. Looking back at Kauai through the hazy air, we see an ominous and surreal sunrise—our solar star almost blood red. The haze is volcanic fog (VOG), carried by light southeast winds all the way from the Big Island 500 miles away. Global warming? Just open up one of Pele’s vents!The water clarity is the opposite— visibility a hundred feet plus, clear and perfect for underwater shooting. The superb, stained- glass ocean hypnotized me as we crossed, with colors changing from deep purple to cobalt blue. As we near the island, we see a glowing ring of electric windex-blue surrounding the shallows.

Now it’s 7:45am. We had just caught a small kawakawa tuna. Funny, it happened while I was reeling in the line so I could start filming. Then Wham! Fish on the hook! First time in my life that happened. On every trip to Ni’ihau we pay homage by our awe of the Keyhole rock formation on the westside of Lehua Rock Wayne had already started to focus on filming the Keyhole by 8 am, when, on summer mornings, a beam of sunlight will pour through this rock crack to illuminate the water below with a glow that reflects off the bottom 50 feet below. Multi- colored fish can be seen dancing through the beam as they feed. I squeak the boat through the Keyhole crack several times with only inches to spare. I was pressing my luck hoping to get that perfect shot.

9:00 am. A pod of spinner dolphins has come over, sixteen or so. We hurry to get our GO PRO camera equipment into the water, gently. I fear I will “butter finger” in my excitement and drop the multi-camera into Davey Jones’ locker. I tell myself to breathe slowly, to relax.

The clear water and angle of sunlight is now giving us remarkable dolphin footage, our best-yet underwater shots. Eye-to-eye shots that make me feel I’m connecting with soulmates. We hear their squeaks and see the bubbles streaming from their blowholes as they dolphin-talk about us. I have seen dolphin pods a lot bigger, but this one is tight.. Maybe that’s the way they like it here. And no cookie cutter shark marks seen! Not one round bite hole and no scars. I thought it odd, but maybe there’s a right pod size less attractive to those cookie cutters. Or maybe it’s where they go to feed?

It is now close to 9:45 am. Wayne and I talk about feeling so very satisfied— that we had “scored” so remarkably, that we could head home to Kauai right now, knowing we had come beyond expectation. We had barely finished that conversation when we thought we had two sharks on the surface, side by side and heading straight to us. Red alert! Get the camera back into the water! (I have no problem telling you sharks give me the creeps—Thank you Peter Benchley!)

So you can understand how pleased I was that the two shark fins turn out to be the twin wing tips of a giant manta ray instead. A bigger than average individual with wings about 7 feet across. With mouth wide open, it approaches, skimming the surface for breakfast.

I’m always thinking: of getting the best shot. But the clock always ticks away. Time is the enemy, so rush to capture the magic moment! Adrenalin sets in. But anything can go wrong. I have had the experience of putting the cameras in as humpbacks battle round the boat, and we thinking we’ll be photographer heroes—only later to find we were never on. Then comes the gut wrenching feeling of photographic zero.

I quickly position the boat to a west course to to take advantage of the sun’s morning angle. I remember the sun bolts momentarily dancing and reflecting off the manta’s back—seemingly an out-of-this-world giant angel, electrically charged, moving slowly with graceful gentle rhythm. All the elements here for great shots, and we’re almost in good photo range—key word: almost—when Mr. Manta Ray changes the plan, deciding to abruptly dive into the abyssal darkness, never to be seen again. Well you cannot win them all, but the trying is sure awesome. You have to appreciate those rare moments.

10:00 am and its time to explore the coastline as we head south down the westside of Ni’hau. About halfway along, we stumble upon a mom and baby humpback whale. Cutting the engines, we excitedly wait, like kids waiting for Christmas morning. Ten minutes later I see there are two blows going out in the distance—one big puff, one small puff. They’re not in the mood to socialize.

Not expecting any more humpbacks, we decide to move to the next windex blue bay, to rest, quench our thirst and have our lunch. Two monk seals snoozing on the deserted beach are our lunch time entertainment.

My lunchtime thoughts are on what Hawaii was like before any man had set foot here. Then come selfish thoughts of never sharing this place with the world. Man would surely bring ruin, as is ever so evident by the plastic net trash washed up next to the seals. But hopefully, the Ni’ihau channel and the distance to this place may be protection enough.

Now we’re closing to the climax of this day’s adventure. It started something like this: “Whales!” I yell to Wayne. “Mom! Baby! Thousand feet away, 1 o’clock!” “Yeah, they’re coming right to us,” Wayne replies. I watch them, but hmmmmm, we’re now heading north, to the east of Ni’ihau about a mile away; and to the west is a lonely fisherman setting his traps, maybe a thousand feet away. It’s always a concern—possible whale entanglement.

That was a factor in my decision to just cut the engines right there, and besides the whales are heading right towards us. They’re still far away, out of photo range. We sit there lining them up like bowling pins, thinking this will be a relatively close swim-by. We set up the cameras and wait. And then the magic began. The whales come past around the boat’s port side as we drift with bow pointed south. Now they turn, heading right for our bow at the12:00 position. OK, call it 11:00. Mom and baby slowly coming closer and closer; baby about 18 feet long, looking very thick and healthy. Diet of Mom’s milk Maybe 3-4 months old. Mom huge, close to 50 feet plus. This whale has been on our planet awhile—no stranger to a boat and not the least bit concerned of us.

Once the whales get to the red zone, 30 feet away, I get this whale Super Bowl, fourth quarter, 2-minute-warning, underdog feeling. Our team may be behind, but we’re beaming with confidence! We’re going to win and everything is possible! Powerful bolts of adrenalin take over. The boat is the goal line, and the closer the whales, the greater the confidence. We’re going to score! It’s that whale connection feeling, that edgy, suspenseful, whale addiction thing—for which there is no cure.

The whale season was was almost up, and the whales were just about gone on Kauai’s Napali Coast. I had been going through “whale withdrawal” the last week as the whales dried up. Picture me persistently scouting the horizon for blows that just do not exist. Only another whale encounter will satisfy this need for connection.

And now this whale-addict captain, going through whale withdrawal, looking for his whale fix, now has whales coming dead on, to his boat with engines off, floating in the middle of absolute nowhere. And he has no clue he is about to have a once-in-a-lifetime experience, a sneak peak into the secret life of humpbacks—their mating, that holy grail, to be revealed in a delayed action process. To the best of my whale knowledge, what’s never before been filmed underwater, and possibly never before witnessed.

Today we’re to go far and beyond any normal whale-fix day. Like kids excitedly, contently, watching a fireworks rocket’s glowing take off, and not knowing that the delayed reaction of the real explosion is still to come. Thinking back, I had already been beyond overwhelmed, totally satisfied with the above surface sights. If that were it, if there was nothing more, I would have considered already having won the whale Superbowl.

So appreciate my surprise and thrill seeing for the first time the unexpected—the secret whale world revealed by the underwater Go Pro cameras. But it actually was not till 8 hours after the actual event that these whale fireworks really exploded, breaking all scales of my previous whale experiences.

Previous postKauai Weather – What’s it Like?
Next postSpotting the Hawaiian Green Sea Turtle