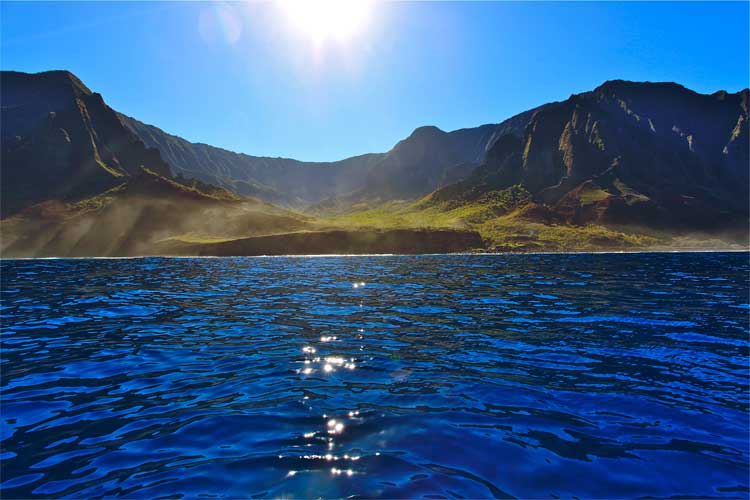 Bowl-shaped within sheer walls of rainforest green, it’s 3 miles back and 3 miles across. Her mystic spell pervades, broken only momentarily by tour helicopters that appear like tiny, hovering mosquitoes. The valley’s great west wall ends toward the sea in cascading cathedrals of stone, with lava dikes upthrusting like their namesake, together forming three towering, knife-edged pyramids. Known as the Three Guardsmen, they take command, steadfast and true, of the second highest sea cliffs in the world.

To truly describe Kalalau I must recall my own personal and perfect experience in this Garden of Eden: the hidden waterfalls I showered beneath; the slippery-slides of water-sliced rocks to play on; the sweet perennial stream, fairy-tale like as from one’s lost childhood, flowing gently, searching through this mystic hobbit-like valley, finally to reach the love and comfort of Mother Ocean.

To some, Kalalau Stream is a natural spa. Its boulders form a series of natural jacuzzis to relax one’s tired muscles, and for any masseuse, the rocks become perfect massage tables to perfect the craft. For others the sun-warmed rocks are like beach mats without the issues of sand, naturally made for those who want that no tan-line tan. Imagine basking in the warmth of the sun, your eyes relaxed and shut, your ears tuned to the music of the running waters, and to the birds whose songs blend with the trance-like rhythmic beat of ocean waves crashing beyond onto seashore rocks. You breathe in the perfume of wild gingers whose flowers scent the stream-side air. When finally you open your eyes, and if the hypnotizing multi-blue Pacific catches your gaze, you might find your beach mat of rounded stone magically turned into a front row seat to one of the greatest shows on earth – when your eyes for the first time connect with a distant 40+ ton humpback whale flying full body out of the water.

At first it is hard for the mind to register what is seen, to break it down for the mere human brain, like absorbing the awesomeness of the power of an Apollo moon rocket in lift off. And then, as the mind ponders, the whale forcibly hits the deep cobalt-blue water, shooting up a contrasting stark-white explosion of water.

The water-transformed air stands out momentarily as lightning does in the dark of night, and then comes the slow dissolve back to blue as air and water go their separate ways. You cannot take your eyes off that spot of take-off and impact… anticipating more, wanting more, your’re hooked. You’ve gone beyond spellbound, the mind refusing to return, because a good Kalalau whale show is addicting, with no cure. This is only one of many things that bring people back for more. Kalalau will change a person’s perspective of life.

It’s gifts are a treasure chest of lifetime memories — of electrifying acrobatic dolphins spinning through high-fly jumps just off the beach, or of the sampling of assorted fruits deep inside the valley. To many this is where just about every human sense can be satisfied; to others it’s the complete feeling of nature’s peace that draws them back. To me, there is no doubt the Creator is giving us a real glimpse here, a slight taste, of heaven. And for that alone I am thankful.

For most, these descriptions of Kalalau Valley would suffice, but still, it’s incomplete without a brief story about some of the characters who visit… or stay. Every year thousands make the Kalalau pilgrimage, from every walk of life, and from all across the world. Some take the challenge by kayak. Yet others, brave and energetic, take the 11 mile access trail from the end-of-road hamlet of Ha‘ena, considered a Level 9 for difficulty. This is no cake walk — one section is nicknamed, not figuratively, “crawlers ledge.” To many, it’s a rite-of-passage to just reach that 11th mile. Others take the trail by sections, for a more comfortable pace. But no matter how you do it, the experience shapes every participant’s character.

So imagine a very conservative couple with plans to take this trail during their carefully planned honeymoon. No doubt they will endure the trail, and each other as well. And guaranteed, they will learn much they never before knew about each other’s minds—like as who thought enough food was packed, or who was in charge of bringing the flash-light, and the mosquito coils, but didn’t. Whatever the unexpected, like when forced into temporary retreat because wild goats have taken over the crawlers’ ledge, and those mental flashes that this could well be the first and last honeymoon—all never mind.

Any challenge faced and overcome would be to just make themselves a stronger team. So, being determined to finish, finally on their second day they feel the finish line: Kalalau’s beach sand beneath their feet. To the right the deep blue Pacific, in front down the beach the camper’s cave, their highly anticipated accommodations for the next 2 nights, and to the left the looming, verdant valley, beckoning.

There’s nothing like a cave of cool rock with cooled air, and a ceiling against rain. Close enough, too, to the ocean to keep most of the mosquitoes away. And to the left, the most amazing waterfall coming down right next to the beach—a perfect place to shower off the beads of hiker sweat that poured down their faces.

His first thoughts: my cave woman new bride will domesticate this cave with the camping gear, and me, I will go have my first solo waterfall shower. So up he climbs to the waterfall like an excited boy scout on his first hiking trip. Wow, how cool is this? Hollowed out bamboo sticks that could be shoved up a watery crevice to get a real fire-hydrant shower! So in he went. So strong was the water that he could not hear anything, and with eyes shut and head down against the water’s power, sometime during that 5 minutes of blind wash, he felt a presence— that he was not alone anymore. Probably his new wife come to join him, but as he turned his head round and his water-filled eyes focused, there, to his surprise, next to him were two naked hippie girls. Startled, and not knowing what to say, with eyes down he asked reflexively where they were from. The closest answered, “from where ever we are at this time.” It was high time to get back to his new bride!

Giving a smile and a half wave he quickly bid goodbye. But he thought of the truth in her reply, dissecting it in his mind over and over. This was what Kalalau is all about, living free in the moment—hmmm, yes, that’s it, he thought. And his brain replied, “Aren’t we all, aren’t we all!”