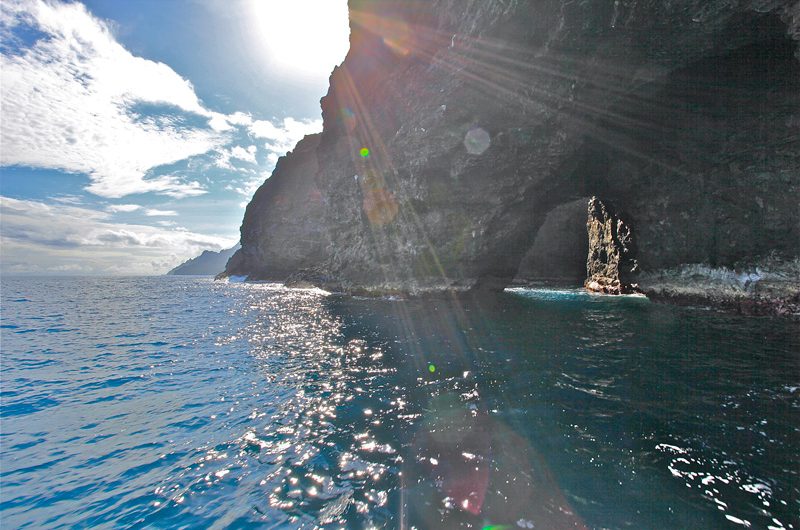 As the boat captain, I know what question is on the tip of my customers’ tongues: “Will we be able to get into the sea caves?”

Honestly, I reply that it is never a guarantee; every day the ocean conditions can change. We will go in as long as we can come out. to keep the wind in their sails, I humor them. “Napali has a mind of her own, like my wife,” I reply. I understand, because I love the caves too.

Their eyes beam with excitement as we enter a cave, drinking in its allure, its mystery—this magical and unique world that leaves most people momentarily spellbound. Most will admit to never having seen anything like it before. Then the excitement triggers the questions that fire at me like a machine gun: “How did this form?” “What makes that heavenly Windex-blue color to glow on the cave’s open ceiling?” “Are those ghosts in the spotlight of the Double Door cave?” “How did that waterfall get in there?” “What is that purple and blood red color along the cave’s tideline?” “What kind of birds are nesting in there?” “What movies were filmed here?” I think I need to have a tranquilizer gun just to slow down the onslaught of questions, but the truth is I am just as excited as they are, and it never gets old.

You can’t get into the sea caves every day, but when you do, it is always a new experience. Like the Open Ceiling Cave, which can be with or without mid morning sunbeams, but like two different caves to be experienced. These caves can give the best day of your vacation as well as of your life. Let us describe in detail the caves and arches you will be visiting here in our Na Pali Coast Sea Cave Review…

As our raft enters on the left side, look for the electric blue glow of the water that contrasts with the shadowed black ledge that looks like beaten metal. Sunbeams entering the cave can penetrate through the summertime calm and crystal-clear water and reflect off the white sand bottom, giving forth the heavenly blue color. the feeling imparted is surreal, leaving most people speechless, and with a deep calming peace, like in a relaxed trance. Some call it a healing color, I think, as it temporarily, at least, relieves stress and its ailments. this cave alone under the right conditions will justify your hawaii vacation, as you leave more relaxed than ever.

has its own unique features and views. As you enter, look back at the waterfall behind you; it is framed in by the cave entrance. Look for schools of small fish below, hiding in the shadows and maybe a white-tip reef shark looking to make a meal of those fish; see the the nesting noddy terns looking for their next meal. As you get deeper into the cave, the walls of the cave edges stand out more. the gray to black lava rock contrasts with the coral growing at the surf line with colors from pink to blood red.

may be called Napali Wood sea arch from the movie filmed there. other movies have been made at this location, including Pirates of the Caribbean, King Kong (the older remake), James Bond, and the Man with the Golden Arm—with that dramatic helicopter scene of flying through the arch. there is an air of mystery here, for honopu Valley that the arch fronts has been nick-named Valley of the Lost tribe. Its ominous walls tower over 3000 feet, with fluted walls contrasting from lime to dark green. Looking westward down the beach through the arch, look for the glimmer of the water fall shining through the foliage. Many stories are told of this valley as haunted by ancient warrior spirits. Perhaps there was once a traumatic battle here that left souls imprisoned and wandering to haunt the valley for eternity.

Just around the corner from Hanakoa Valley, on rare occasions when it is flat calm, the experience of going through this arch is amazing. High-lighted by a rushing waterfall right next to the raft, you take a ninety degree turn as you pass through. the view looking west as you begin to exit the arch is a post card moment: the Na Pali coastline at its finest—waterfalls plunging into the sea, Jurassic-green sea cliffs above, and below, water glowing out-of-this-world Windex blue.

Bottom-line, the best sea cave in Hawaii—known to most as the Double Door Cave. Entering through the back door with a trickling waterfall above, a large room appears. to the left is a narrow channel between the cave wall on the left and the Death Rock. the channel at first appears to go nowhere. then turning hard left, look down a long dark hallway with a distant light at the end. As your eyes start to adjust to the darkness, you are pleasantly surprised with a waterfall inside the hallway, and when the afternoon summer light comes through the hole of the waterfall cave, an erie spotlight appears in the cave hallway, like a multi colored glass window. Calcium deposits rise through the spot-light appearing like ghosts. the beam of light is further high-lighted by the mist from the waterfall, appearing like a scene from Star Trek. Looking at the waterfall, one almost expects to see mermaids sitting and combing their hair. this cave goes beyond any expectation.

Also known as “Pirates Cave,” it’s entrance is guarded by a rushing waterfall, providing every passenger daring to enter with a cooling shower. It is the biggest of the caves, and with the highest ceiling that is covered with green mosses. It reminds one most of the cave in the movie the Goonies. 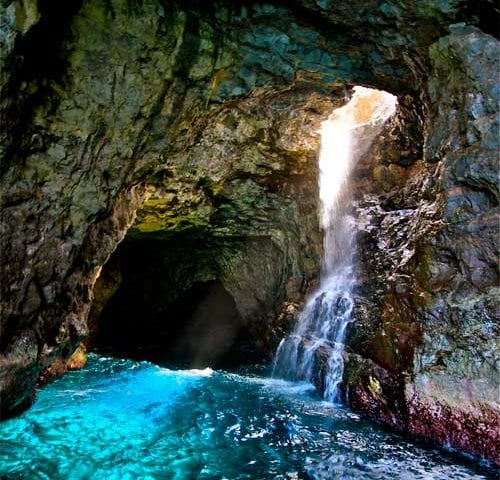 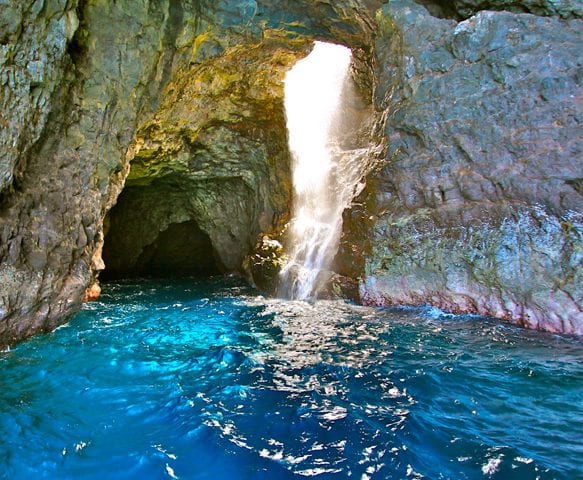 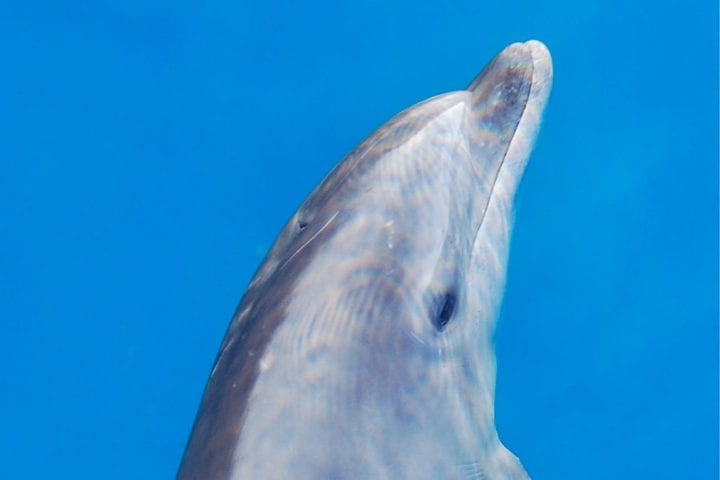 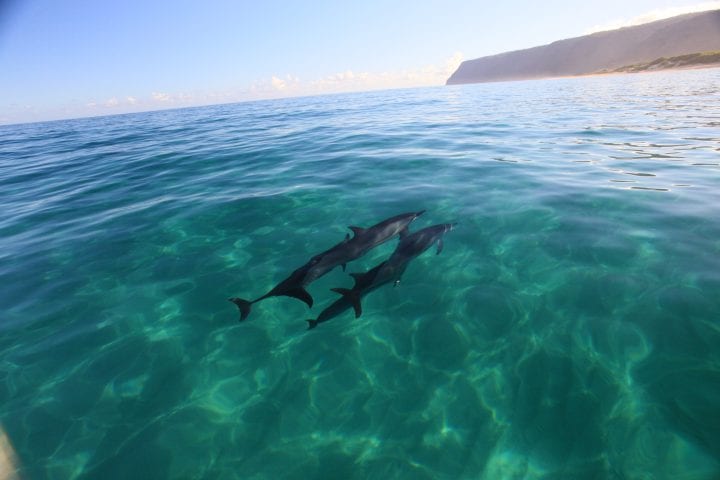 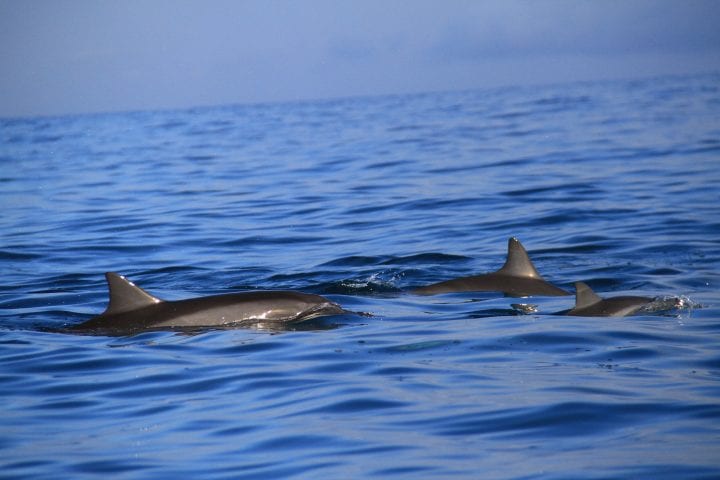