The Hawaiian Monk Seal: Survivor of the Sea 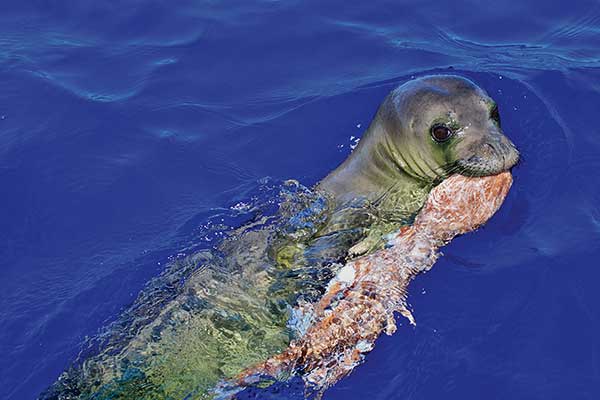 Survivor of the Sea Seeing Hawaiian monk seals along the Na Pali Coast is always a rare treat. As one of the most endangered species left on the planet, their numbers are dwindling each year with only approximately 1,200 individuals left in the wild. Even with federal protection their road to recovery is a long one—being that it is a road full of potholes. They are unable to reproduce fast enough to replenish the population, at a sustainable level, as it takes roughly eight years for a female to reach maturity. When the female does give birth the mortality rate for a pup is extremely high due to shark predation, lack of food, habitat loss, and entanglement in derelict fishing gear. Human interaction is also a problem as more pups are born in the main Hawaiian Islands at popular beach areas. So, many obstacles to survival clearly show their extinction is inevitable. For those who do survive against all of these odds, a life of leisure seems to be the case—or so it seems at first. We often spot the Hawaiian monk seal basking on the beach and looking so very sleepy and mild-mannered. But the seals are actually taking an important “nap” and are not to be disturbed. They are restoring the critical energy they will need to hunt for food later on—to keep them alive. For these survivors of the sea, extreme intelligence is key. They are smart, top of their class, and never to be underestimated. With the energy of puppy dogs, and the grace and speed of ballerinas in the sea, they are able to conquer the challenges of the ocean. When I do occasional scuba dives at the island of Ni‘ihau, there is a monk seal who acts as the “welcoming committee” for me every

Survivor of the Sea Seeing Hawaiian monk seals along the Na Pali Coast is always a rare treat.