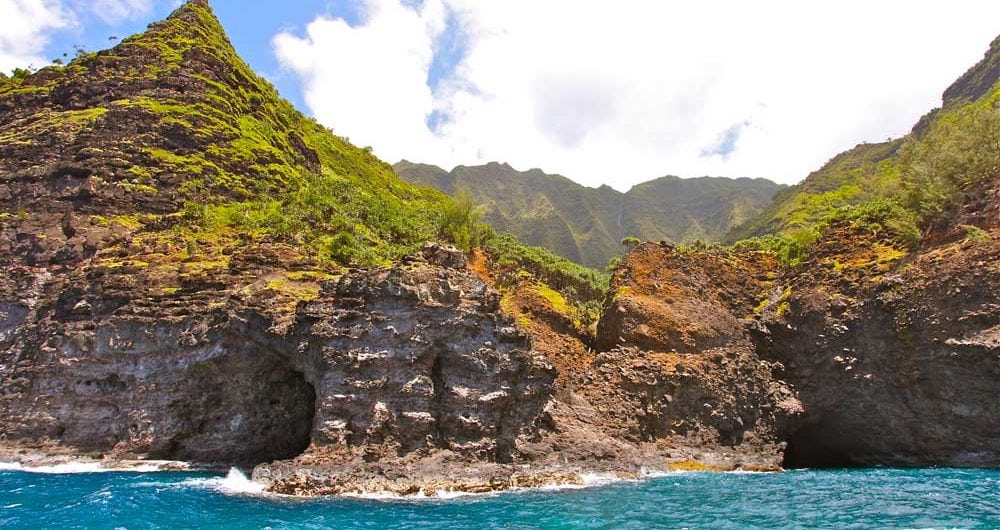 Kauai Sea Caves – Getting There

There are numerous wet and dry caves to tour in Kaua’i, but the most spectacular caves are found on the Nā Pali Coast, where access is only by sea.  Here, dramatic sea arches and sea caves have formed in the cliffs as a result of the relentless, pounding Hawaiian surf, which reaches heights up to 40 feet in the winter months!  Many wonder how to get to these caves, and a boat tour is the way to go.

In the summer months, the Nā Pali Coast surf subsides and the sea caves can be safely accessed by boaters and kayakers alike, making Kauai sea cave boat tours worth looking into. For those wanting to get there, you’ll need the right Kaua’i boat tour and tour guide to make it happen, and that’s what NA PALI RIDERS RAFT TOURS is able to provide.  Using a 30-foot Zodiac© rigid-hull, inflatable raft, the NA PALI RIDERS RAFT TOUR is able to safely explore the sea caves on Kauai’s Nā Pali Coast, many of which are very narrow and difficult to get inside of.   We have well over 20 years of experience in navigating Kauai’s waters, and our captains are knowledgeable and skilled, making our Kaua’i sea cave tours experience safe and entertaining for our passengers.

Warning:  Our tours operate year-round, however the sea caves are not always safe to enter.  If you’re only interested in entering and exploring sea caves, then book your Kaua’i raft tour for the summer months when the surf is small enough for our raft to safely enter the sea caves on our tours.

Make Sure You Pack Your Camera for This One!!!

Would highly recommend this boat trip to any group of any age. Our party of 8 is filled with a range of ages from 13 to 87 and everyone thoroughly enjoyed it. Not only is the scenery absolutely spectacular but due to the flexibility of the zodiac we were able to get into many of the caves along the shoreline and close to the cliff faces where we saw an enormous number of spinner dolphins and sea turtles.

The Open-ceiling Cave, also known as Queen’s Bath, is actually a hollowed-out lava tube (e.g. the ceiling has crashed into the sea floor below).  When you are inside of the cave, you can literally view the sky above.

The Open-ceiling Cave is famous for being the world’s most impressive example of a littoral sink.  Here, the ceiling has collapsed entirely into the sea floor below, creating a cylindrical chamber that measures ~150-feet in diameter.  A narrow, seaward entrance allows small boats and kayaks to enter the cave and perform a circular route around the interior rock island.  The water depth inside the cave is 65-feet. 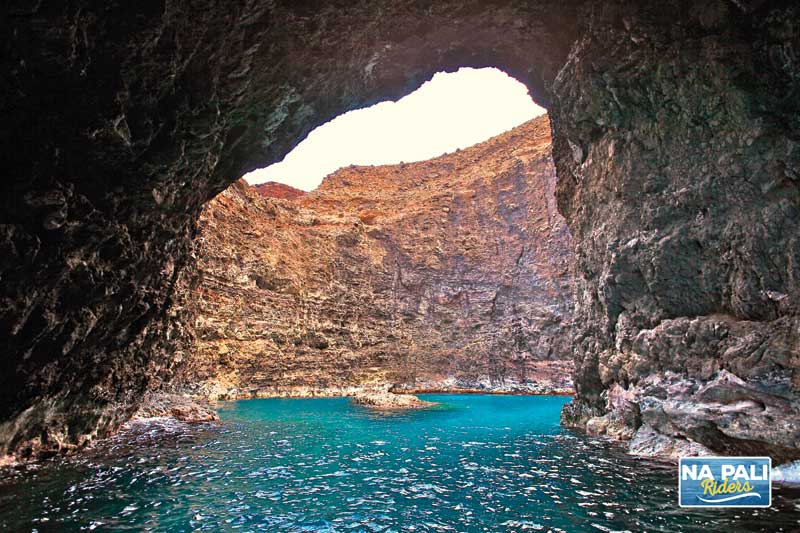 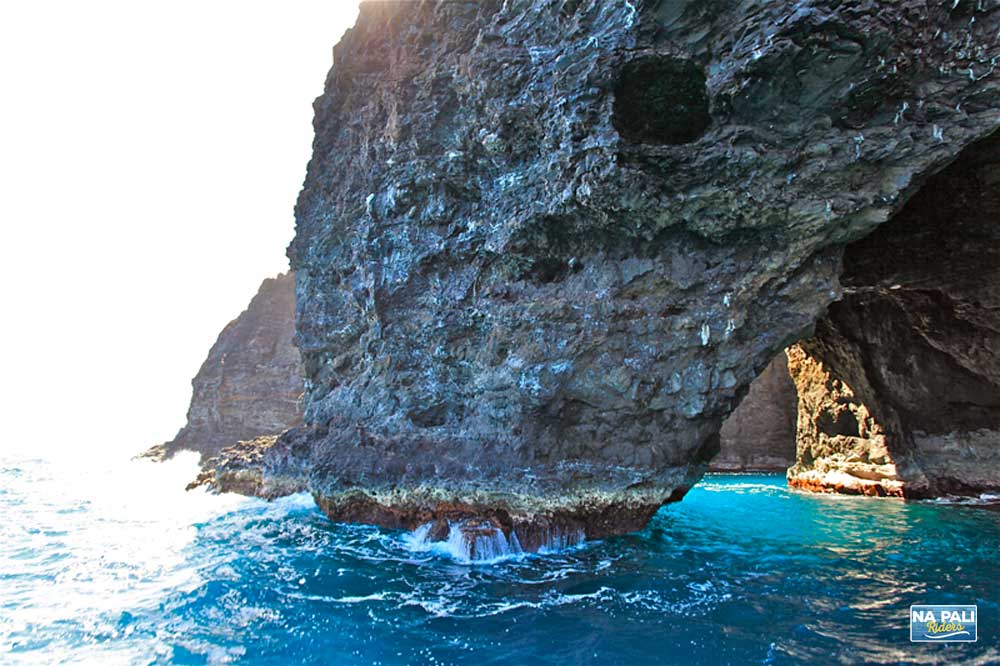 The Open-ceiling Cave.  In the summer season, the mid-morning sunlight streams through the cave’s dark entrance, penetrating the crystal-clear waters and reflecting off of the white, sandy bottom.  The result is a boldly blended color palette of electrifying blues and greens—it’s truly spellbinding. 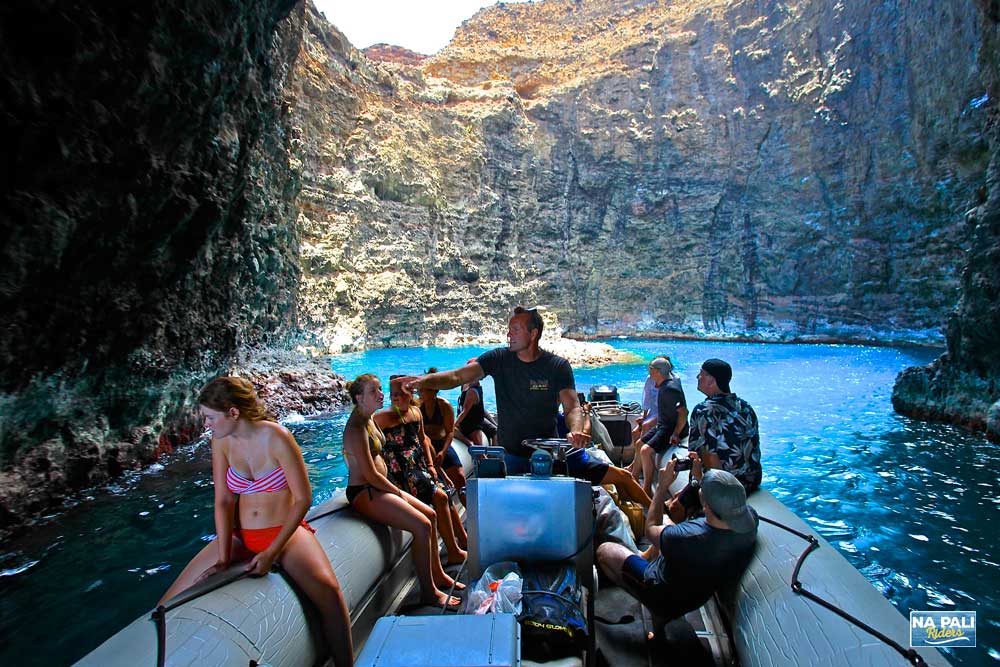 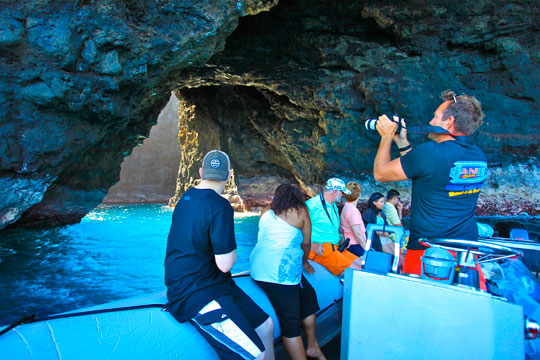 The Waiahuakua Sea Cave is 1,155-feet long, making it the largest of the Nā Pali sea caves, and the second longest sea cave in the United States.  Waiahuakua Sea Cave means “sacred water” but is known to most as the Double Door Cave because it has a separate entrance and exit.  ~200-feet into the cave, a littoral sink allows a perennial waterfall to gush down the cave’s western wall.  When the afternoon summer light shines through the hole, a glowing spotlight appears in the water below. 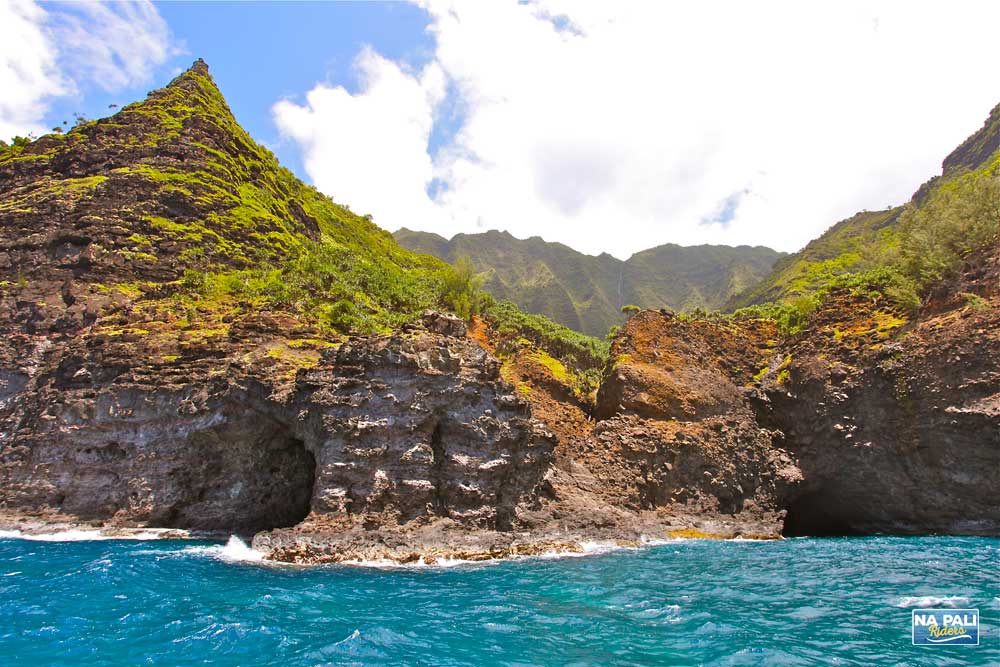 Visitors absolutely love touring the interior of the Waihuakua Sea Cave. Upon exiting the cave, a gushing waterfall provides a cooling mist for weary travelers. 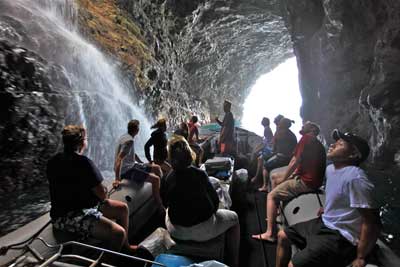 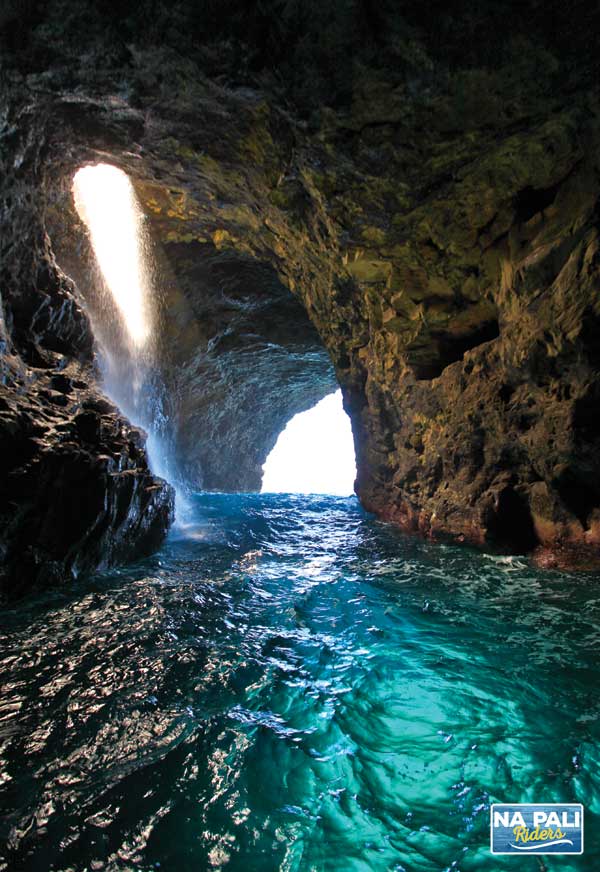 The Nā Pali Coast Sea Arch is highlighted by Pōhakuao Falls in the background.  When sea conditions are extremely calm, our raft tour may travel right through the arch.  Upon exiting, you will be treated to a panoramic view of the entire Nā Pali Coast.  Cool, misty spray coming off of the waterfall is a refreshing treat on a warm, summer day. 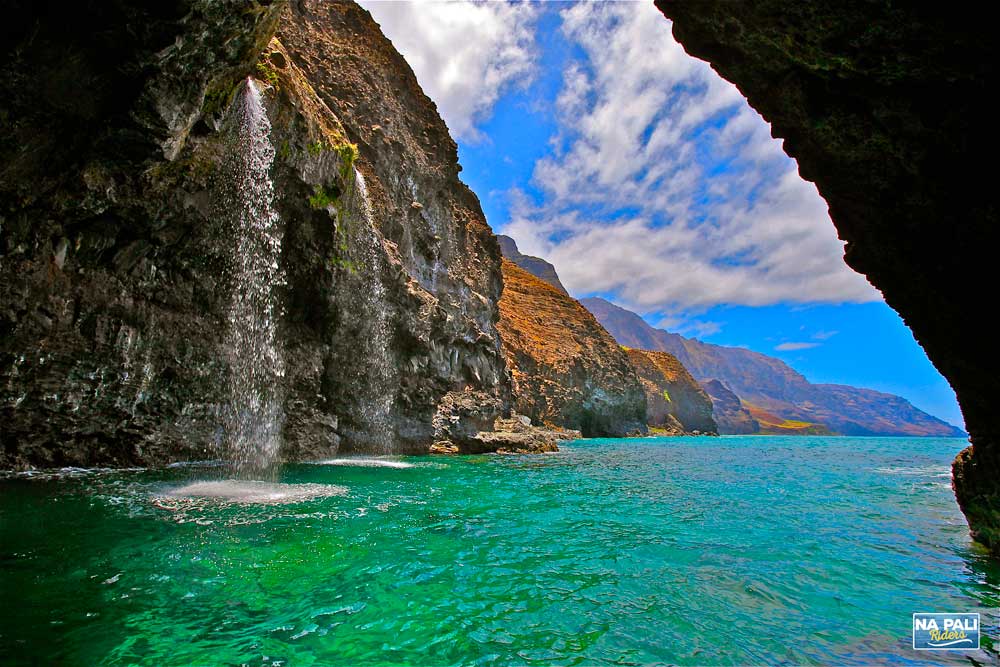 This cave was once a fishing area for Hawaiians. A freshwater waterfall streams over the entrance, and is a favorite for passengers to duck their head under for a refresher along the tour. 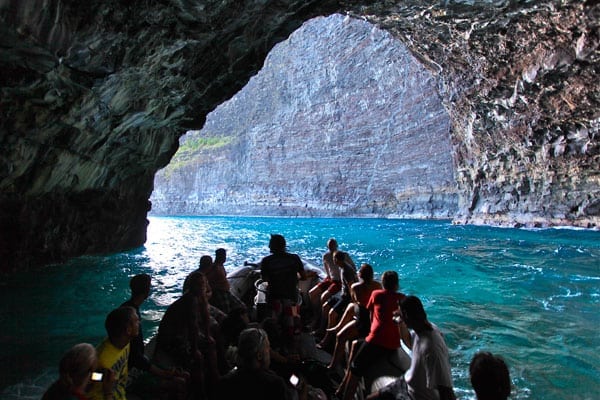 Waiwaipuhi Sea Cave is nick-named the Pirates Cave, but literally translates to “great blowhole,” because in the winter months, the crashing surf turns the cave into a powerful blowhole that spews water straight back out to sea. 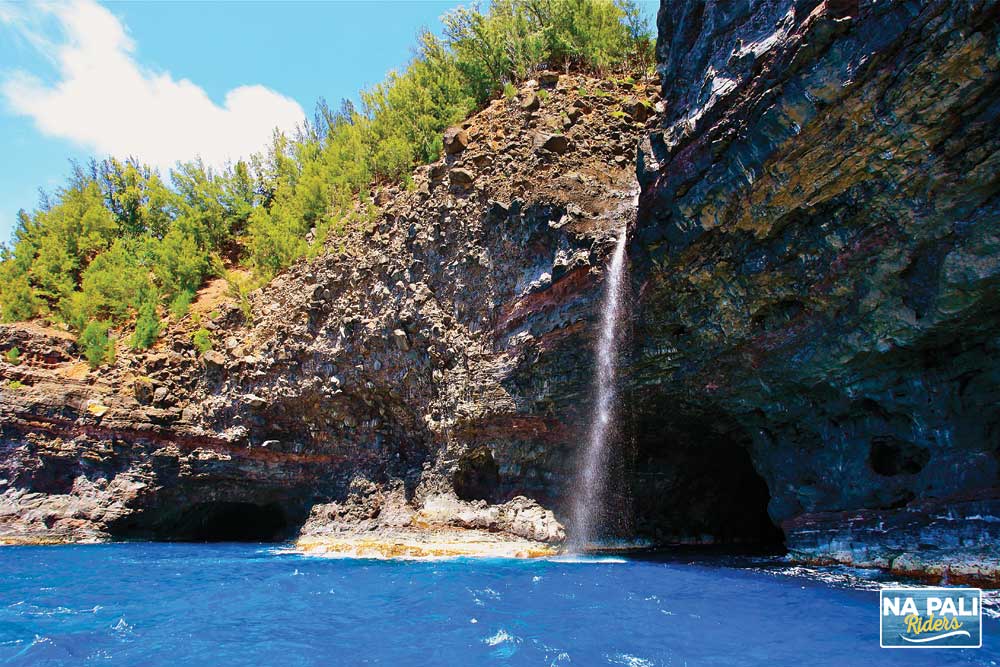 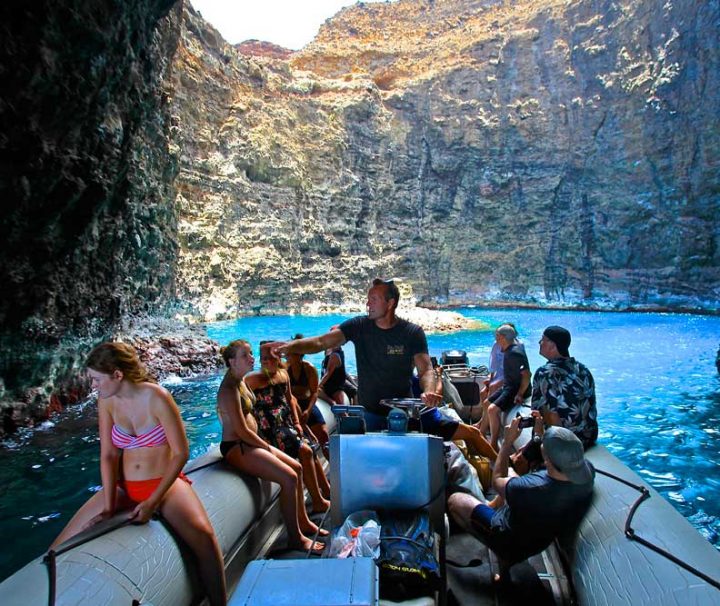