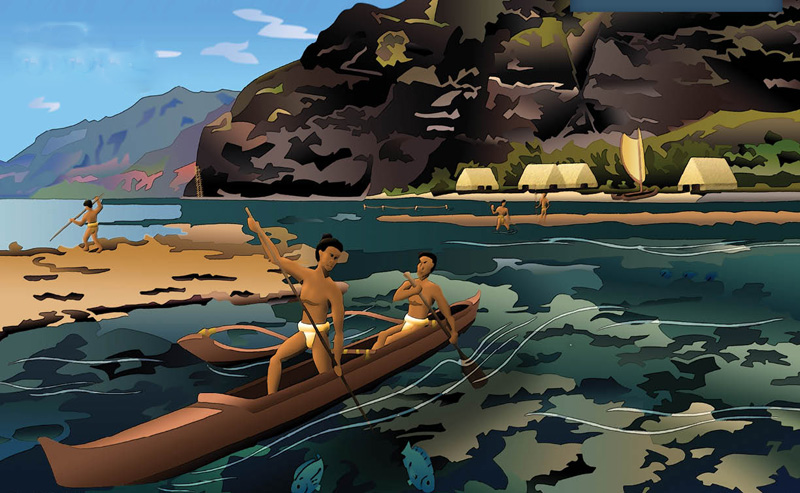 To me this seems like overpopulation, even though they brought sustenance with them: the coconut tree, the kalo (taro plant), banana plants, breadfruit, and yams, just to name a few. They also brought pigs and dogs. They built elaborate, long stone walls and terraces along the streams, which were essential for cultivation on the valley floor, especially for the kalo.

On the entire Kauai island, the Hawaiian population was estimated to have reached a whopping 110,000 persons. I believe so high a population was possible because of the good drinking water and the durable kalo which was their staple. Kalo is one of the most nutritious plants on this planet.  The kalo’s root could be boiled or pounded into nutritious poi and could then be preserved, semi-fermented—for later eating. The kalo’s leaves could be eaten as well.

Due to the need for firewood for cooking, the valley was much deforested, except for hala trees whose leaves, or lauhala, were used for making huts, mats and clothing necessities. An odd bread fruit tree here or a coconut palm there—the place was rather bare in places. The most sacred koa trees were spared to make canoes. Much of the wood for fuel was probably thrown down from the cliffs where it was harvested. Treacherous trails led to the Kokee forests above the back or south end of the valley.

These people’s lives were hard. No time to get bored or for thinking too much. It was all about survival.